by An Ordinary Man (the novel)

“In the mating game. This is probably going to be harder to explain than it has to be because I haven’t discussed it with anyone yet so my thoughts aren’t completely organized.”

“Not even Charlie?” she asked, referring to the department head they nicknamed after Darwin even though his real name was Edward.

“Especially not him. It might not even be biology as much as psychology so, no, not even him.” 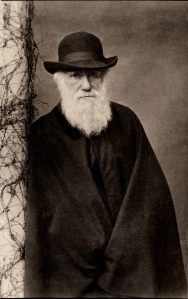 I doubt anyone called Charles Darwin “Charlie” after a certain point.  Mr. Darwin formulated the theory of evolution while on a 5-year voyage around the world on the H.M.S Beagle.  At the time, he was dithering between becoming a clergyman or a physician and his very wealthy father may have pulled some strings to get him a position as the ship’s naturalist to move him along one way or the other (with a 5-year voyage?).  Anyway, Darwin took almost 30 years to publish his On the Origin of Species (1859), a vast compendium of facts documenting and supporting his ideas.

The book was almost called The Tipping Point before I decided on An Ordinary Man.